It’s week 8 of the “Deal Me In” challenge and I finally selected a spade.  The Queen of Spades is Flannery O’Connor’s short story, “Greenleaf.” 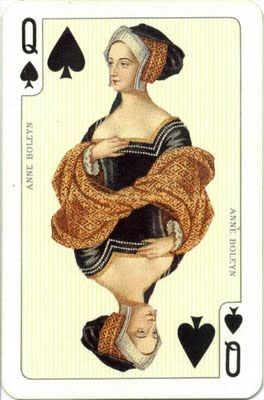 Mrs. May is one of those quintessential O’Connor women.  She’s similar to the grandmother in “A Good Man Is Hard to Find” and Mrs. Hopewell in “Good Country People”.    As the story begins a bull has invaded her space.    Right outside her bedroom window, she sees him “chewing steadily with a hedge-wreath that he had ripped loose for himself caught in the tip of his horns.”  He seems to emanate a “pink glow” and “bars of light” are created on him as Mrs May lifts the Venetian blinds.    This bull is acting like an “uncouth country suitor”, “gaunt and long-legged.”  If you have read much by O’Connor, a Catholic living amidst the Georgia baptists, you might as well be given a big sign that says “Christ Figure” on top of the bull’s wreath.

But that would be an over-simplification of O’Connor’s understanding of faith.

Mrs May has had a worker, Mr. Greenleaf, for some fifteen years.  Much of the story contrasts Mrs. May and her two sons and the Greenleaf family and their sons.  Mrs. May’s sons are surly and named Wesley and Scofield, two Prostestant theologians:  “Scofield was a business type and Wesley was an intellectual.”  The ‘boys’ are in their 30’s and still live at home which would not mean anything today but this story was written in 1956.

Mrs. Greenleaf is her nemesis in large part because she is a faith-healer and calls out to Jesus.  Mrs May comments that “Jesus would be ashamed of you.”   We know that Mrs. May is a “good Christian woman with a large respect for religion, though she did not, of course, believe any of it was true.”

The contrast between the Greenleaf way of belief and the May way of non-belief underscores the narrative.  Mrs. May thinks that the Greenleaf twins, inexplicably named O.T.and E.T. Greenleaf–who are younger than her sons got lucky during the war and became “some kind of sergeants”.   They had both married nice French girls and it rankles Mrs. May that “they had both managed to get wounded and now they both had pensions.”  Her son Wesley got out of serving because of a heart condition and Scofield never made it past private.

Mrs. May bitterly contemplates that fact that the Greenleaf family is likely to climb high in “society.”  They already have their own “milking room” which is a “spotless white concrete room … filled with sunlight.”

Although O.T. and E.T. are the apparent owners of the bull, they don’t seem to be in a hurry to catch him.  Mrs May comments to her sons that “I’m the victim.  I’ve always been the victim.”   While her sons get into a fist-fight and smash the crockery about, Mr. Greenleaf promises that he will get rid of the bull.

But Mrs. May’s animosity intervenes and she has a final date with the bull who becomes like her “wild tormented lover.”  He holds her in “an unbreakable grip”.

Mrs. May has been in the hating business a long time.  Her sons are overaged disgraces.  They taunt her and each other as if they were 10 years old.  Mrs. May looks down on the Greenleafs as “scrub-human” and she tells her sons bitterly that within twenty years the Greenleafs will be a family in “society”.  As Mr. Greenleaf says, “I thank Gawd for every-thang.”

Mrs. May seems to be getting a well-deserved come-uppance in the world as her fortunes fall while the Greenleafs’s fortunes improve.  She strikes me as the quintessential Trump voter–60 years premature.

my love affair with Russian literature