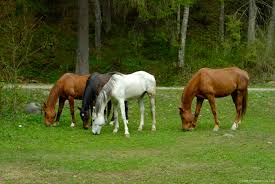 At Grass
by Philip Larkin

The eye can hardly pick them out
From the cold shade they shelter in,
Till wind distresses tail and mane,
Then one crops grass, and moves about
– The other seeming to look on –
And stands anonymous again

Yet fifteen years ago, perhaps
Two dozen distances sufficed
To fable them: faint afternoons
Of Cups and Stakes and Handicaps,
Whereby their names were artificed
To inlay faded, classic Junes –

Silks at the start: against the sky
Numbers and parasols: outside,
Squadrons of empty cars, and heat,
And littered grass: then the long cry
Hanging unhushed till it subside
To stop-press columns on the street.

Do memories plague their ears like flies?
They shake their heads. Dusk brims the shadows.
Summer by summer all stole away,
The starting-gates, the crowd and cries –
All but the unmolesting meadows.
Almanacked, their names live; they

Have slipped their names, and stand at ease,
Or gallop for what must be joy,
And not a fieldglass sees them home,
Or curious stop-watch prophesies:
Only the grooms, and the groom’s boy,
With bridles in the evening come.
********************

The technical merits of “At Grass” redeem it from any charges of sentimentality. I gravitate more and more towards poems about aging and loss. It may be less painful to see the representation of retirement and waiting for death anthropomorphized. But one need not read the horses as allegorical figures, I think.
Larkin most likely intended us to see his characters simply as horses and not representations of human anguish. He is typically great with animals; his poem “Myxamatosis” is heartbreakingly chilling. He left money for the RSCPA in his will.

I think that “At Grass” belongs in the brilliant tradition of the “bird poem”–Shelley’s skylark, Yeats’s swans and gold enameled bird, Hardy’s thrush, Keats’s nightingale–they sing to us of what has been and what is and what will be. Although Larkin’s horses do not sing, he imbues them with memory and desire.   Larkin’s horses are playing out the scene of the future of everyone who manages not to “die young”.

I love what Wyatt Prunty does with the mole in this poem.   When was the last time you thought of the “intricate need” of a mole?  Prunty uses sophisticated vocabulary  such as “humoral,” and “cuneiforms” to focus on the very specificity of this mole as we reach into the back corridors of our word-hoards.  If you can read this out loud or in your mind’s voice, notice the fantastic sound-effects:  “zagged illegibles,” and “berm builder” and “nuzzling through a muzzy neighborhood” and “Myopic master”.  This mole is a blind scribe, a builder, and he has political opinions:  an immigrant, he’s also an isolationist.   Wise, prudent, bashful and quizzical, he has the “imperative poise of now”.

And we have a new way of looking at a mole!  This mole seems like an elderly Frostian New England observer:  slow to speak, slow to move, and slow to write but always deliberate.  Both Prunty and the mole build bridges between our limitations and our capacities to look once again, with new vision, at something we’ve passed without thought in the past.

Prunty is such a great poet!  He’s always dancing with the dictionary; seeing with the microscopic and kaleidoscopic eyes of a visionary. 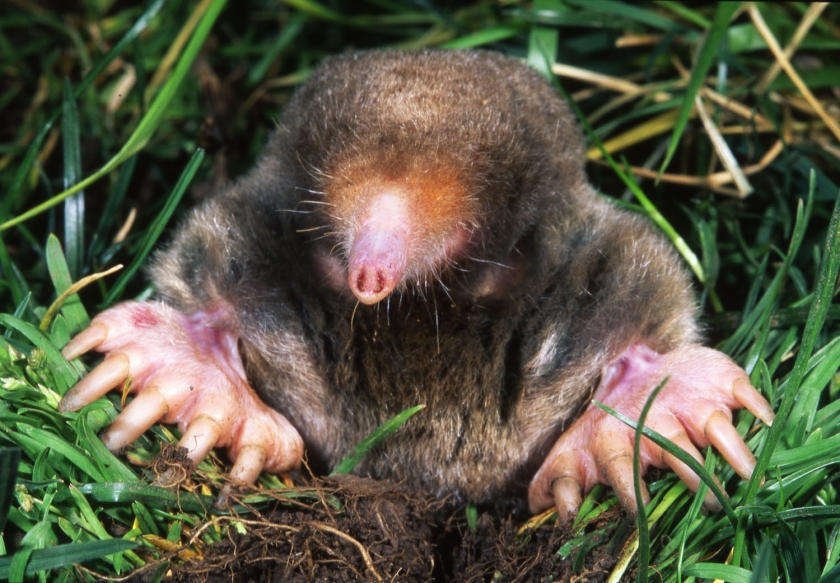 We must avert our eyes; this image is too sickening.  It takes a strong poetic voice to humanize it and a magician to make it loveable.  Mark Wunderlich has written a magnificent poem about a coyote like this one.

“Coyote, with Mange”
BY MARK WUNDERLICH
Oh, Unreadable One, why
have you done this to your dumb creature?
Why have you chosen to punish the coyote
rummaging for chicken bones in the dung heap,
shucked the fur from his tail
and fashioned it into a scabby cane?
Why have you denuded his face,
tufted it, so that when he turns he looks
like a slow child unhinging his face in a smile?
The coyote shambles, crow-hops, keeps his head low,
and without fur, his now visible pizzle
is a sad red protuberance,
his hind legs the backward image
of a bandy-legged grandfather, stripped.
Why have you unhoused this wretch
from his one aesthetic virtue,
taken from him that which kept him
from burning in the sun like a man?
Why have you pushed him from his world into mine,
stopped him there and turned his ear
toward my warning shout?
Source: Poetry (March 2009)
The poem is a series of five piercing questions addressed to the “Unreadable one” who may be our vision of a God, of the crass apathy of Nature, or the untaggable sense that somehow manages things.  The poem has a Thomas Hardyesque unblenching acceptance that disaster and cruelty can strike anywhere.
Mark Wunderlich takes unflinching and realistic snapshots of animals in many of his poems and then he moves on to make the ugly endearing without sentimentalizing or moralizing or trying to serve us a platitudinous finale as a kind of dessert for entertaining the image of the coyote with mange.   Wunderlich makes me feel a deep well of compassion where I might have turned away in disgust.  He shows us the coyote as a “slow child,” a ” a “bandy-legged grandfather,” and a member of our world.  True, he only has one aesthetic virtue:  his fut that has been denuded by the mange.   The fur that protects him from the rays of the sun and keeps his “pizzle” dignified is his house.
Wunderlich has three published books all worthy of purchase.  His topics are numerous and his poems about animals
This is what poetry is for, for me:  to make me look at something in a new and significant way.  Now I see the coyote as a kinsman needing, like me, some sort of house.  I can see making a minute observation of the coyote and seeing the ways in which some outside force has failed him:  not simply the scourge of mange but the indifference of the “Unreadable one.”